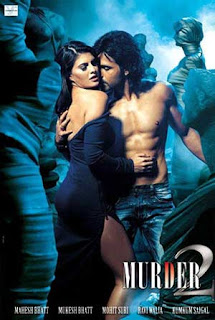 The music of Vishesh Films' movies is usually impressive and the songs of their 2004 release "Murder" were extremely popular and so high expectation from the album of "Murder 2" is not too much to ask for. But the film's tracks, although not bad, do not succeed in engaging the listeners.

A compilation of eight tracks, the album is full of love songs.

The flavour of romance starts with the first song "Hale dil", composed and crooned by Harshit Saxena. It has nothing new that can impress music lovers.

It also has an acoustic version, which has a soft rock touch.

"Aa zara", composed by Sangeet and Siddharth Haldipur, is a moderately paced song. It has a sensuous feel about it and Sunidhi has aptly captured the mood with her powerful voice that gives the song an edge.

The track has a remix version too.

Next is "Aye khuda", which has been composed by Mithoon, who also goes behind the mike along with Kshitij Tarey and Salim Bhat to sing the song. There is a strong Sufi influence and the song has a minimal musical arrangement. Focus is on vocals and singers impress with their high pitch. Worth a listen.

Another track composed by Mithoon is "Phir mohabbat" that has Mohammed Irfan, Arijit and Saim Bhat behind the mike. The slow-paced song with less music is not instantly likeable because of average lyrics, but it slowly grows on you thanks to likeable composition.

Sangeet and Siddharth's second composition in the album is "Tujhko bhoolna", which is full of techno beats. The moderately paced number, sung by Sangeet and Roshni Baptist, is average and offers nothing great to the listeners in terms of composition.

On the whole "Murder 2" soundtrack has nothing extraordinary and it is not even a patch on the music of "Murder".
Posted by Indiblogs at 12:55 PM