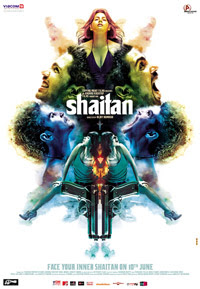 Just like its promos, the music of upcoming film "Shaitan" is also edgy, quirky and quite away from the realms of a typical Bollywood venture. The album has been put together by four composers and a music band with a variety of singers behind the mike.

The soundtrack of the film that is about a group of five youngsters boasts of 14 tracks.

The album kickstarts with a short instrumental called "Enter" composed by Prashant Pillai.

Next comes in "Bali-the sound of shaitan" that has been doing the rounds of channels for some time now.

Composed by Pillai, most of the song's lyrics sound gibberish except a few lines here and there, but the music is cutting edge and catches the attention of the listener instantly, owing to its quirky nature.

It has been crooned by K.S Krishnan, Preeti Pillai, Kalloist, Farhad Bhiwandiwalla and Hitesh Modak.

Then there is "Nasha" churned out by Pillai again. The song has been inspired by the bond of friendship. It is moderately paced but orchestration is reasonably strong. A lot of experimentation with sound is witnessed in this track that has vocals by the composer himself along with Bindu Nambiar.

The song also has a rock and soul version where Pillai has been replaced by Ranjit Barot and Farhad Bhiwandiwalla for the vocals.

"Josh" composed by Amar Mohile and sung by colin Terence, Abhishek and Shradha starts with English rap and then goes on to Hindi lyrics. The song is contemporary from the word go and has majorly used the saxophone in the composition.

Then there is "Fareeda", a slow-paced, free flowing track with a slight rock feel. The music in the song is commendable and very engaging, especially the guitar lead towards the end. This has been voiced by Suraj Jagan and has been composed by Pillai.

Up next is a recreated version of "Hawa hawai", a song from the 1987 film "Mr. India". The original was composed by Laxmikant-Pyarelal and sung by Kavita Krishnamurthy.

For "Shaitan" it has been recreated by Mikey McCleary and has been sung in a more contemporized style by Suman Sridhar. This version is slower in pace as compared to the original.

"O yaara" with Pillai as the composer again and singers like Kirti Sagathia and Preeti Pillai, starts with a Shehnai prelude. The track has a qawalli touch along with other influences added to it. This one is slightly close to the common Bollywood sound that we know of. A nice song about love and longing.

Next comes "Pintya", a song with influences from Maharashtrian folk, composed by Ranjit Barot. It has vocals by Chandan Shive. The track has a lot of punch and is fast-paced. Later contemporary influences crop up in the song.

"Zindagi" is a soft, slow-paced title track with minimal music in the beginning. A few seconds into the track, the music becomes stronger. It has been sung by Barot and also composed by him. It's an impressive track and edgy and frequent change in tempo makes it more interesting.

Then the album offers three instrumental tracks, while "Amy's theme" has been composed by Barot, "retro pop shit" has been churned out by Anupam Roy" and "Outro" by Pillai.

On the whole, the album is very different from a typical Bollywood album and that just might work in its favour.
Posted by Indiblogs at 9:58 AM