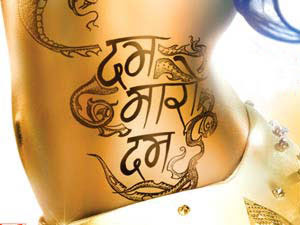 Pritam Chakraborty is back on track after the not-so-rocking music in the film "Thank You". For "Dum Maaro Dum", the composer has created both fast- and slow-paced numbers that are enjoyable and hummable.

It begins with the title track "Mit jaaye gham", which is a revised and re-arranged version of the cult 1971 song "Dum maaro dum" from the film "Hare Rama Hare Krishna".

This version has been sung by Anushka Manchanda and has been made contemporary with new lyrics, rap and additional beats and sound effects.

The song has a neo-age feel and might be a hit on the dance floor, but it somehow lacks the appeal of the original.

Up next is a song "Te amo", describing a girl and the various facets of her personality.

Crooned by Ash King and Sunidhi Chauhan, the moderately paced track is quite pleasing and hummable and adds a soft touch to the album. It also includes a few English lyrics.

The song has two more versions. One a solo by Sunidhi and the other a reprised version by Mohit Chauhan.

Mohit instills life into the song with his mesmerising vocals and the raw feel of the unplugged song creates an impact.

Then there is "Jiyein kyun", which is the best song of the film. Sung by Papon, the song starts with no music in the background and the full focus is on the vocals.

After a few seconds in the song, light music seeps in, giving way to a stronger orchestration that then follows. It has a very raw, fresh feel to it with colloquial lyrics.

The guitar riffs later in the song draw interest and engage the listener. On the whole, a super composition and great singing by the vocalist.

Finally, there is "Thayn thayn", which has none other than actor Abhishek Bachchan behind the mike with ample support from Earl and Ayush Phukan.

Abhishek is mainly rapping in the track. It starts with a dialogue, but soon acquires the hip-hop feel. It is a situational song.

On the whole, Pritam has proved with this album that he has the capability of churning out interesting tracks. A good job done by the composer.
Posted by Indiblogs at 10:20 AM 1 comments

4- My Heart Is Beating
Sonu Nigam

9- My Heart Is Beating (Remix) Remix
Harry Anand
Posted by Indiblogs at 10:32 AM 0 comments 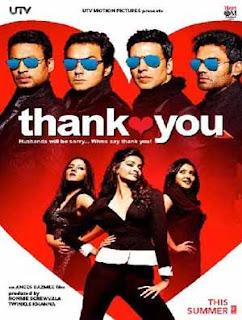 Pritam Chakraborty is known for creating interesting and impressive soundtracks, but he fails to compose anything extraordinary for "Thank You". The sounds and songs are ordinary.

It opens with the a re-arranged version of "Pyar do pyar lo", a hit cabret number from Firoz Khan's 1986 film
"Jaanbaaz". Pritam has revisited it with new lyrics and new appeal. Crooned by Mika Singh, both sounds and lyrics are a put off. The neo-age version falls flat. Not a very good beginning for the album.

It also has a remixed version.

Next is "Razia", a fast-paced item number kind of a song that has Master Saleem and Ritu Pathak lending vocals to it. While the musical arrangements have contemporary techno beats, the style of singing and lyrics are rustic. Despite the experiment, the song falls flat and creates no interest.

A remix follows this version too, which is average.

Then comes in "Full volume", which hints at the olden style of singing. Sung by Neeraj Shridhar and Richa Sharma with nasal touch, which used to be prevalent in retro songs. It also has rap in the background and the base beat reminds you of the composition in "Zor ka jhatka". On the whole, this love song too fails to make a mark.

Even the remix sounds stale.

Next is titled "My heart is beating", where Sonu Niigaam tries to mimic singer Shabbir Kumar, giving the song a touch of the 1980s and 1990s. It offers equal amount of contemporisation with English lyrics and modern beats. However, even though it's funny in the beginning, the song fails to hold the interest.

Again the remix version has nothing extraordinary to offer.

Finally, the album offers a moderately-paced love song called "Pyaar mein". Javed Ali and Neeraj Shridhar try to impress with the mushy lines, but ordinary composition takes away the soul from the song. It doesn't connect with the listener, although Pritam tries to come in his own skin with this number.

On the whole, quite a disappointing soundtrack by Pritam. The composer has done a much better job in the past, but "Thank You" somehow misses his magic touch.
Posted by Indiblogs at 12:08 PM 0 comments