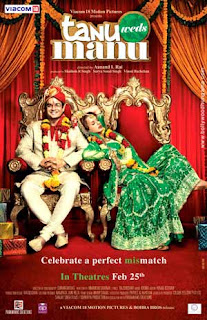 From a full-on Punjabi track to a soulful qawwali outing - the music of forthcoming film "Tanu Weds Manu", composed by debutant music director Krsna, is all that and more.

The album is a must hear and a very impressive effort by the composer, who has packed in tracks of various genres, making it a complete entertainer. The film offers seven tracks.

The energetic and exuberant number gives a kickstart to the album and makes the listener more interested in what's in store.

The foot-tapping song catches the pulse of the listener with its Punjabi lyrics and entertaining beats. Get ready to groove and dance your heart out with "Sadi galli".

With "Yun hi", the album takes a 360 degrees turn and completely changes the mood. Sung by Mohit Chauhan and Ujjaini, this beautiful love ballad will steal your heart.

The enchanting vocals, melodious composition, simple lyrics and the subtlety of musical arrangements give an edge to the song. Its breezy and pleasing quality makes it instantly likeable.

Then the composer takes even the mantle of vocals in his hands and presents "Rangrez" - a qawwali. An interesting attempt and Krsna pulls it off wonderfully.

While the composition is the same, this version definitely stands out more than the original - solely owing to the characteristic style of the singers. It's a music buff's treat.

Next comes a semi-classical track "Piya", which has Roop Kumar Rathod behind the mike.

Soaked in the Indian flavour, this love song is quite likeable. It's rare to hear classical-based songs in albums today, so this track is a welcome break from the usual modernised songs.

The track is full-on 'desi' with lyrics that have a touch of humour. Even though the song is largely situational, it does demand a listen, owing to its fun element.

Finally, the album offers "Jugni", which has been sung by many singers over the years.

The Punjabi folk song has been written and crooned in various versions and has been likeable in all. This time, Mika Singh takes the mantle of singing. The song has been contemporised a little bit and adds energy and zing. Overall a great track.

On the whole, the album is entertaining and will be majorly liked. Its amalgamation of various genres will make it applicable to different tastes and age groups. Good job done by the debutant.
Posted by Indiblogs at 11:59 AM