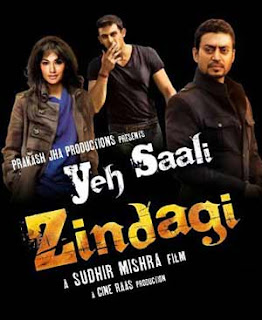 Nishat Khan is a great Sitar player, but composing music for a Bollywood movie is a different thing altogether and the artiste has failed to impress with the music of "Yeh Saali Zindagi".

The first song is the title track crooned by Sunidhi Chauhan, Kunal Ganjawala and Shilpa Rao. It begins with a long prelude and sets the base for the vocals. It constantly changes pace from slow to fast to slow. It's got a very western feel and is neither bad nor brilliant.

The title track has two more versions - male and female versions. Sung by Abhishek Ray, the male version is quite different from the original in terms of composition as it includes a rap portion. But even after the alterations, the song is a let-down.

The female version is the same as the original; only Kunal's part has been crooned by Sunidhi and Shilpa.

Next is "Sarara", a song that doesn't sound contemporary at all. Javed Ali has sung the number that has a good dose of 'desi' beats. It has no high points and nothing worth noticing. In short, it is unimpressive.

It has another version, which has been sung by Sukhwinder Singh.

Then there is "Dil dar-ba-dar", which was initially supposed to be the title of the film. A duet by Shilpa Rao and Javed, the song about love and loss is a disappointment.

"Ishq tere jalwe" finally brings in some relief. The poignant love song with Javed and Shilpa behind the mike is coupled with strong orchestration and praiseworthy vocals. The rock influence gives it an edge.

Finally, we have "Kaise kahein alvida" by Javed again. This is the best song of the album and is beautifully rendered by the singer. The slow pace and semi-classical touch create a tranquillising effect and makes the romantic number something to look forward to in the album.

On the whole, one would have expected better composition by the composer; lack of freshness and experimentations make it boring.
Posted by Indiblogs at 11:06 AM