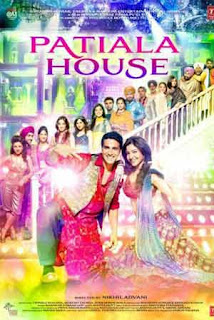 "Patiala House", Akshay Kumar's first outing of 2011, has music that is not something uncommon, yet most of the songs are entertaining and bring out the signature style of composer trio Shankar-Ehsaan-Loy.

The album offers 12 songs, including remixes.

"Patiala House" music commences with "Laung da lashkara" with Mahalaxmi Iyer, Hard Kaur and pop singer Jassi - who has made an appearance after a long time - singing it. This is the title track and quite apt for a film that is named "Patiala House". Full of Punjabi energy and flavour, the song includes a few rap lines as well.

There is a remix version of the number in the album.

After the first song, the album takes a turn and comes up with poignant track "Kya main jagoon" crooned by Shafqat Amanat Ali. It has a long prelude before the vocals begin, but then it is evident that full focus is on the vocals and music becomes secondary. The song changes pace quickly, which is very interesting and cuts the monotony. Shafqat's voice is praiseworthy and adds weightage to the song. on the whole a beautiful number that strikes a chord with the listener.

It has two more versions - a regular remix and an unplugged version where the tone of vocals is slightly low. These are equally likeable.

Then comes in "Rola pe gaya" that has Mahalaxmi, Shankar, Earl, Master Saleem and Hard Kaur behind the mike. In spite of so many singers, the song fails to make a mark. Initially, it entertains a little bit, but soon the listener loses interest in the not-so-fresh composition. Even the lyrics don't impress.

The remix version has nothing great to offer either.

Next song "Aadat hai voh" brings in some respite. Sung by Vishal Dadlani, it has a pleasing guitar strumming in the beginning that sets the mood. Then the rise in the tempo with strong orchestration gives the song an edge. It's a nice, moderate-paced track that grows on you.

"Baby when you talk to me" is the only pure love song in the album, sung by Suraj Jagan and Alyssa Mendonsa. With Hindi and English lyrics, the foot-tapping song is hummable and engaging but you do get a feeling of dejà vu as the composition doesn't sound too fresh.

This one too has a remixed version.

The next track "Tumba Tumba" is a qawali by Hans Raj Hans and may appeal to those who love qawallis, although the song seems to be more of a situational number.

In the end a Sufi song enters the album. "Aval allah" is also a situational track and might be effective on screen. Sung by Richa Sharma with minimal music, the song does have its high moments.

On the whole, the music of the album is neither bad nor brilliant. Some songs are entertaining and some need more punch. It's time for Shankar-Ehsaan-Loy to reinvent themselves.
Posted by Indiblogs at 11:08 AM