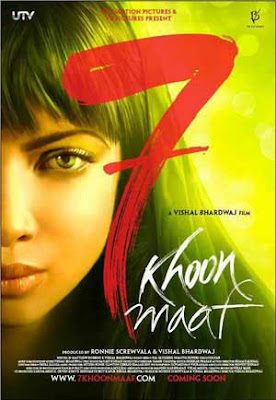 When Vishal Bharadwaj decides to score music for a movie, fans are confident that he will come up with high quality compositions that will mesmerise everyone. And this is exactly what happens with the album of "7 Khoon Maaf", which offers songs for all tastes.

The album has nine songs.

The soundtrack gets a startling start with the already hit number "Darling" and it's an addictive number. The Indian version of traditional Russian folk song "Kalinka", "Darling" instantly strikes a chord with the listeners. The Russian flavour is captivating and makes you shake a leg on the foot-tapping tune. The unusual combination of two singers - Usha Uthup and Rekha Bharadwaj - works well for the song. The mischievous lyrics and the energy in the music makes it a winner all the way.

Next is "Bekaran", a nazm (Urdu poetry) penned by Gulzar. Bharadwaj had heard the nazm some time back and loved it so much that he decided to incorporate it in the film as a song. Bharadwaj has sung the song and his silken voice adds the required softness. It is so beautiful that it may help in re-discovering the forgotten romantic side in you.

With minimal orchestration and more focus on vocals, the song has the true flavour of a love. If you want to impress your lady love, "Bekaran" is the song for you.

"O mama" by KK and Clinton Cerejo offers something different - it's a rock-inspired number, offers a lot of punch and is quite hard-hitting. An interesting attempt where KK shows his expertise yet again. It will surely appeal to youth owing to its sound and appeal.

The song also has an acoustic version, which is definitely softer but the raw factor is intact. This version has a completely different appeal altogether. Even though both the versions are praiseworthy, the acoustic one somehow manages to impress more.

Next is "Awaara". Sung by Master Saleem, the song starts with a very simple sound but has a dark and grim feel about it. The sudden ups and downs in the tempo are interesting and the vocals add edge to the song that grows on you.

Suresh Wadkar has been a constant feature in most of Vishal Bharadwaj's albums and this time he sings "Tere liye", a soft, pleasing, slow paced love ballad. It is quite hummable, but not as good as other songs in the album. It's neither bad nor brilliant.

Then there is "Dil dil hai", an out-and-out rock offering, sung by Suraj Jagan. The song somehow fails to create an impact in spite of power-packed orchestration and rock flavour, which is quite popular nowadays. The song might fit well in the film, but individually it falls flat.

Up next is a devotional number titled "Yeshu". Voiced by Rekha, the song is poignant and sounds nicer with an expansive chorus in the background.

There is another version of the song "Darling" called "Doosri darling" and it has Usha, Rekha, Clinton and Francois Castellino behind the mike. It starts with Russian lyrics and then Rekha makes an entry and the song slows down completely, only to gain pace again after a few lines.

As expected Bharadwaj has composed a wonderful album that is not a clone of his previous work. It exudes freshness and is worth listening. However, the songs would not have achieved zenith without Gulzar's lovely lyrics. The team has done it again.
Posted by Indiblogs at 11:40 AM