'No One Killed Jessica' Music Review 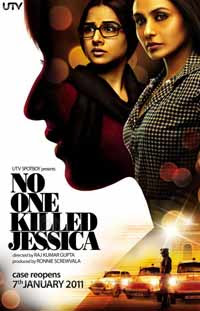 Amit Trivedi has arrived! The young composer, who has given music buffs a reason to celebrate with soundtracks like "Dev D", "Aisha" and "Udaan", proves his prowess yet again with the music of the forthcoming film "No One Killed Jessica".

The cutting-edge, out-of-the-box tracks are definitely worth a listen, especially "Dilli", which will give you goose bumps.

The film offers six tracks, all written by Amitabh Bhattacharya.

Anyone who has been following Trivedi's music knows that the composer usually likes to experiment and compose tracks out of the realms of a typical Bollywood song.

So is the case with the first track of the album "Aali re", crooned by a host of singers including Tochi Raina, Biswasjit Chakraborty, Shriram Iyer, Raja Hassan, Anushka Manchanda, Sonu Kakar, Aditi Singh Sharma and Sonika Sharma.

The song is the description of a bold, rebellious, outspoken, dynamic and headstrong woman. A lot of slang is used with edgy music. The song grows on you and is not something that is normally hummable, but it does make an impact on the listener.

Then comes in the star of the film "Dilli". Brilliantly sung by Tochi Raina, Shriram Iyer and Aditi Singh Sharma and keeping in mind the mood of the film, the song is extremely hard-hitting and makes you sit up and take notice.

It starts slow but soon gains momentum, packing in a lot of spunk and energy. With strong rock influences and a lead that pierces through, "Dilli" is a sure shot winner.

The track also has another version "Dilli harcore"; there is however not much difference between the two songs.

Next is "Aitbaar", another rock-flavoured arrangement with Vishal Dadlani, Mame Khan Manganiyar and Robert Omulo behind the mike. The song, which is an amalgamation of folk, rap and rock, is an amazing combo of outstanding vocals and engaging music.

Then the album takes a turn and brings forward a softer song "Yeh pal" to the forefront. Effectively voiced by Shilpa Rao, the song starts with a focus on vocals and minimal musical arrangements in the background. Slowly towards the end of the song there is a long musical piece where the orchestration becomes stronger and louder. A likeable track.

Finally there is "Dua", which is sung by Meenal Jain, Joi Barua, Raman Mahadevan and Amitabh Bhattacharya. The song starts with a soft prelude of varying tempo, which is more than a minute long.

The song gets a head start when the chorus sets in. It is quite engaging but after more than three minutes in the song, it gains momentum and the music becomes stronger and the pace becomes slightly faster. This arrangement gives an edge to the song.

On the whole, Trivedi, who is also a National Award winner, has given impressive music which is sure to create a stir.
Posted by Indiblogs at 6:53 PM