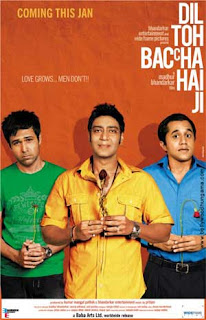 Pritam Chakraborty's compositions in "Dil Toh Baccha Hai Ji" album is perfect for the season of love. This is Madhur Bhandarkar's first comedy and the music of the film will be lovers' delight.

Hummable, likeable and sweet number "Abhi kuch dino se" marks a good beginning for the album. It has been crooned by Mohit Chauhan and his voice is apt for the love song that creates a lively mood for the listeners.

Next is "Tere bin", which has all the qualities to be a chartbuster. The high point of the song is that it is sung by Sonu Niigaam, who is the master of the genre. The free flowing melody is interspersed with English lyrics. The easy on ears orchestration makes the love ballad more beautiful. It is moderately paced and is a song one would like to hear in loop.

The song also has two more versions - one is a reprise version, which has a raw appeal and has been sung by Naresh Iyer and the other is a usual remix version of the original with more beats.

"Yeh dil hai nakhrewala", sung by Shefali Alvaris, is an interesting number and has a rock feel. The song does engage for a while, but then loses its lustre. It is average.

It has another version called the film version where Antara Mitra replaces Shefali. However, the original is better.

Then comes another romantic number titled "Jadugari". The song with alluring guitar strumming has Kunal Ganjawala behind the mike. The musical arrangement is soothing and interesting.

Finally comes "Beshuba", a duet by Kunal and Antara. The soulful, breezy, love ballad is a typical Pritam composition with his signature style quite evident in the music.

On the whole, the album will be thoroughly enjoyed by people in love. Also, Pritam has done a good job of churning out melodious and soulful tracks.
Posted by Indiblogs at 10:17 AM