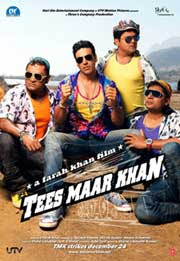 If you thought that "Munni badnaam hui" from "Dabangg" will take the cake for being the most popular item number this year, then think again! The song "Sheila ki jawani" from the forthcoming film "Tees Maar Khan" is ready to give it a tough competition.

The film has music by composer duo Vishal-Shekhar and offers five originals and four remix tracks. All the songs from the album are fun, energetic and pacy.

The album starts with a bang with the energy-packed title track that is the only song written and composed by Shirish Kunder. The highlight of the song is singer Sonu Niigam has crooned it all by himself in many different voices including that of a woman. The song has all the ingredients of being a chartbuster with a change in tempo. With engaging beats and dialogues, the song gives a good start to the soundtrack.

The title track has a re-mixed version too.

Next comes "Sheila ki jawani" sung brilliantly by Sunidhi Chauhan by ample support from Vishal Dadlani. It is an instantly likeable song. The beats are very interesting that makes the listener get up and shake a leg. It's sure to be a favourite at the DJ consoles.

This one too has a re-mixed version.

The album takes a slight change with a qawwali, which has become a novelty in film albums nowadays. The song called 'Wallah re wallah', has Kamal Khan, Raja Hasan, Shreya Ghoshal and Shekhar Ravjiani behind the mike. The song has good beats, making it pacy and interesting.

There is a remix of this song too.

Then comes an average track titled "Badey dilwale", which is sung by Sukhwinder Singh and Shreya Ghoshal and additional voices by Suzanne Dmello, Vishal and Shekhar. It is also a fast-paced and high on beats song, but it fails to create the same impact like other songs in the album.

The remixed version too adds nothing extraordinary to the original.

Finally, there is "Happy ending" that has been sung by the participants of music reality shows. The singers include Prajakta Shukre, Harshit Saxena, Abhijeet sawant and Debojit Saha. It is quite an average song.

On the whole, the album is a must hear and a fun package of dance numbers that will keep the energy high.
Posted by Indiblogs at 4:39 PM