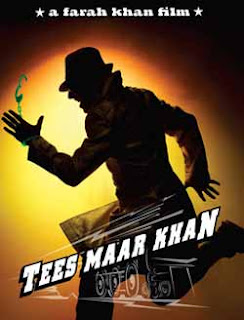 Just like filmmaker Farah Khan's brand of cinema, the music launch of "Tees Maar Khan" was grand, colourful and entertaining. That's because Bollywood stars Akshay Kumar and Katrina Kaif released it in a moving train!

The special train, meant only for the media and the film's cast and crew, left Mumbai's Chhatrapati Shivaji Terminus (CST) station for Lonavala two-and-a-half hours away Sunday. The train had posters of the film all over and even a red carpet inside to welcome everyone.

"It's an important film for us and I wanted to do something out-of-the-box," said Farah.

A train was used as the venue for the launch because the film features a major train heist. "Tees Maar Khan", an action comedy, is set to hit the screens Dec 24. It also stars Akshaye Khanna.

After a delay of two hours, the train left for its destination. The journey was laced with entertainment. First, composers Vishal Dadlani and Shekhar Ravijiani entertained everyone with a live performance and then the star cast consisting of Akshay, dressed like his character in the film, and Katrina, greeted everyone by going from compartment to compartment.

This is the first time the music of a film is being released in this manner as Farah said she wanted to do something different.

Even the actors of the film didn't seem to have a problem with the train ride and seemed to quite enjoy the whole process.

"I have always loved travelling in a train and it's nice to be doing that again. I think this a wonderful way of launching the music, different and fun," Katrina, who was dressed in a peach pink short dress, told IANS.

Once the train reached Lonavala station, more drama was in store. A wedding band started belting out numbers like "Tees maar khan" and "Sheila ki jawani" from the film and the people present at the station were excited to the hilt when they saw Akshay and Katrina alighting from the train.

Then everyone headed to the hotel for lunch, where another performances by dancers were awaiting the guests.
Posted by Indiblogs at 4:44 PM