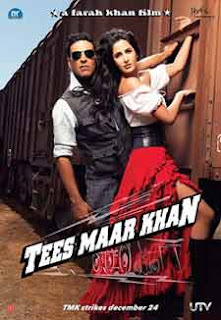 Trust Farah Khan to always do things differently. Moving away from the usual glittering ceremonies, the filmmaker is set to launch the music of her forthcoming film "Tees Maar Khan" on a moving train.

"I didn't want a regular music launch where a hotel is booked and stage is put up with some boring speeches. I wanted to do something unusual," Farah said in a statement.

"For 'Main Hoon Naa', we'd turned the room into a classroom. "Tees Maar Khan" is about a train heist and what better than Tees Maar Khan (Akshay Kumar) taking the media for a ride on the train. It was expensive but worth it," she added.

The launch is scheduled for Sunday.

"We have booked a whole train which will run from a leading Mumbai station to Lonavala for two hours and 15 minutes. The train in our movie is also non-stop. For our music release, there will be live fun entertainment," Farah said.

Once the troupe reaches Lonavala, they will head for lunch at the Dukes Hotel and then return to Mumbai by the same train.

Even actor Akshay Kumar is quite thrilled with the unique idea of the music launch.

"I am really looking forward to the train journey. I will be taking on a train journey after a long time - more than 20 years. Now, I am on trains mostly during my film shootings," he said.
Posted by Indiblogs at 3:47 PM