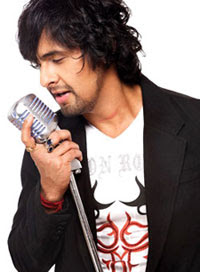 "For me, a live performance is a high that is incomparable to anything else musically. For me, it's a three hour-long orgasm," Sonu said in a press statement.

The singer is set to perform for a live show in Birmingham Nov 13 and in London's Wembley Arena Nov 14.

"You have to be vocally, physically, mentally and spiritually fit and involved for a perfect one. That's the clear test of a true singer. Every other platform can be manipulated with, but not live shows. That's why I get so involved during my performances," he said.

"Last time I came to Britain was for the legendary Rafi Resurrected tour. People worldwide still talk about that one. Meanwhile, my regular live performances have gone to another level," he added.

"Although A.R. Rahman is a genius, these shows will be a lot better because Sonu will be on stage for three hours. Unlike Rahman, who handed over most of the singing duties to unknown singers and only performed his own songs, Sonu will be on stage the whole time," said Kotak.
Posted by Indiblogs at 3:29 PM