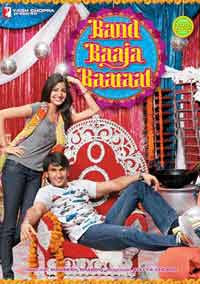 When you hear the name "Band Baaja Baaraat", you expect a full on, energetic, foot-tapping album which is a total entertainer - that's exactly what composer duo Salim and Sulaiman Merchant have achieved with the soundtrack of the film.

They have composed seven originals and two remixes.

The album begins with a bang with "Ainvayi ainvayi". The fast-paced dance number with electrifying beats has a high dose of Punjabi elements, which makes it a potent mixture dance events. Sung by Salim Merchant and Sunidhi Chauhan, the lyrics of the track are catchy. The song gives a good start to the soundtrack.

Dilli Club Mix is the remixed version of the song in which Salim has been replaced by Master Saleem.

Next is "Tarkeebein", which is another likeable song but totally different from the previous one. Crooned by Benny Dayal and Salim again, it is slower in pace and possesses a sense of calmness. The style of the composition is quite similar to an A.R. Rahman song, but still it doesn't give the feeling of dejà vu. The frequent change of tempo gives it an edge.

"Adha Ishq" is a solo by Shreya Ghoshal. Female solos have become quite rare nowadays; so its nice to hear one in an album. The slow, soft, romantic track outing is not great but hummable.

Then there is "Dum dum", which has a Sufi touch. The love song grows on you. With Benny Dayal and Himani Kapoor behind the mike, it entails strong orchestration.

"Mitra" is a lengthy number sung by Amitabh Bhattacharya with ample support from Salim Merchant. The sound of drums is quite prominent throughout the song, making it an interesting hear.

Keeping in mind the theme of the film, the next song "Baari barsi" is an apt addition. Crooned by Harshdeep Kaur, Labh Janjua and Salim, it is soaked in Punjabi flavour. It's a wedding folk song usually sung during marriage ceremonies. By giving it foot-tapping beats, the composers have turned it into an enjoyable number.

Finally, the soundtrack offers the title track, which is more like a theme song. With just the title of the song as the lyrics sung by Salim and Shraddha Pandit, the largely instrumental piece is quite entertaining. The beats are engaging and will make you dance instantly.

On the whole it is full of fun-filled soundtrack and dance numbers are the highlight of the soundtrack.
Posted by Indiblogs at 4:19 PM