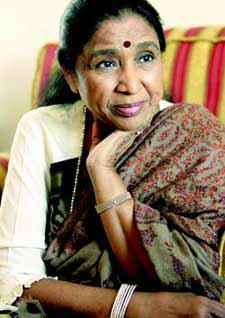 Legendary singer Asha Bhosle is excited on recording live after 30 years - with singer and sitarist Shujaat Khan - for an album that will have traditional classical-based songs. She also feels if a song is melodious, then orchestra is unnecessary.

"Last time I recorded live with (Pakistani ghazal maestro) Ghulam Ali and it was 30 years back. At that time there used to be live recordings. This is my first live recording after that," Asha, 77, told IANS in an exclusive interview.

Titled "Naina Lagai Re", the album is being produced by Sa Re Ga Ma. Asha says she is collaborating with a classical musician after 14 years. Her last was with Ustad Ali Akbar Khan for "Legacy" in 1996.

With the influx of technology, the song recording system has changed significantly - now the singers don't have to record the whole song in one go. They do it in bits and pieces. But Asha still prefers the traditional way of doing it.

"We used to sing songs in one go, but now we sing in small, small parts. I don't want to adapt to that, so I do shows where we sing live with other artists or even solo. When we had to record this album live, we sang the whole song together," said Asha.

"It was a fantastic experience as there was no interruption. Otherwise when we record, music directors create a huge problem by saying do it like this or like that. Here we just sang, if some part was sounding better, we repeated that part," she added.

She didn't have any discomfort singing with purely traditional instruments.

"I didn't feel odd recording live with traditional instruments. It was rather nice because all tunes and rhythms were in sync and we had the liberty to improvise wherever required. We sang our heart out," said the singer.

There were no rehearsals before recording.

"There wasn't any rehearsal before recording. Whatever happened, it happened in the recording studio. But he had made me listen to some songs to give the feel, what kind of melody he was actually looking for," said Asha, who in her more than 65-year-long career has sung over 12,000 songs in 18 languages.

"There should be more melody in the song instead of orchestra. Orchestra sounds good in dance songs, otherwise it's not required. If a song is well-written and sung well, the audience will automatically like it. It's the magic of the singer and the composer that works," said Asha.

She has been on a couple of music reality shows as a guest, but Asha believes these shows are not an ideal platform to judge one's talent.

"I don't see much of a bright future for the winners of reality shows. They sing others' songs. When they have to sing their own song, then you will come to know their original ability," said Asha.

Asked who among the new breed of playback singers she thinks can continue as long as her, Asha said: "Nowadays it's tough to go that far. I started singing in 1943, I was a 10-year-old then. There used to be too many films and in each film, there used to be at least 14 to 15 songs.

"Later the films started having six to eight songs. There used to be heroine centric films, so there used to be many songs for female playback singers. Now there are a couple of item songs and very few for heroines."

Posted by Indiblogs at 4:05 PM