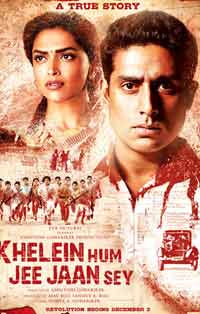 Sohail Sen, who has composed music for "Khelein Hum Jee Jaan Sey" (KHJJS), says he referred to various genres of Bengali music for the soundtrack of the period film by Ashutosh Gowariker.

"A lot of people asked me whether or not I was inspired by Rabindra Sangeet for this film? Rabindra Sangeet is compositions of Rabindranath Tagore and in Bengal there are many other genres too. So you can't select one genre and make songs on that. I took the basic vibes from every genre and then started composing," Sohail told IANS.

Based on Manini Chatterjee's book "Do and Die: The Chittagong Uprising 1930-34", Gowariker's period film is a true story of the revolution of 1930 against the British that happened in Chittagong, then a district of undivided Bengal. Abhishek Bachchan is playing freedom fighter Surya Sen in it and Deepika Padukone the role of Kalpana Dutt.

The composer said that selecting the instruments was very important to get the feel of that era.

"You have to keep in mind the sounds because it is a 1930 film. It was important to see what instruments were mainly used that time in Bengal to lend the right feel to the film. To compile those instruments and design sounds keeping that in mind was an interesting experience."

Sen worked with Gowariker in "What's Your Rashee". Which film was more challenging?

"In 'What's Your Rashee' I was supposed to churn out contemporary music, but here It was a different experience. However, you can't decide what is difficult or what is not. It is always difficult to compose. It mainly depends on your approach to your work," he said.

He composed music on the sets in Goa.

"The shooting was happening in a small town in Goa. I went there and stayed with them for a month and a half. In the morning, I used to go to the sets and interact with all the actors, then I used to come back to the hotel and create tunes.

"That was a nice experience because I got a chance to see the locations, the cast and crew. I used to take all those vibes and compose the tracks. After pack up Ashutosh sir used to come and we used to select tunes," said Sen.

The film has 12 tracks across various genres. Sen, however, got stuck while composing "Sapne salone".

"I did face certain problems while composing 'Sapne salone', which is a romantic number in the film between Abhishek and Deepika's characters. The age difference between Kalpana (Deepika) and Surjya (Abhishek) is quite a bit; so you have to keep a maturity level in the song and at the same time you have to keep a little mischief too. So while composing the song, I did face a little bit of problem," he said.
Posted by Indiblogs at 4:36 PM