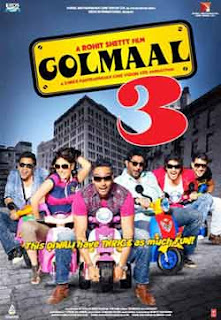 The "Golmaal" soundtrack was composed by Vishal-Shekhar, but Pritam Chakroborty took the mantle from the composer duo for "Golmaal Returns" and presented quite an energetic soundtrack. For the third instalment, the music director has clubbed the retro feel of the 1980s along with contemporary music and the combination makes the album a must hear.

The album of "Golmaal 3" boasts of six originals and three re-mixes.

The soundtrack kick-starts with the high energy title track of the film, crooned efficiently by KK, Anushka Manchanda and Monali Thakur. The song boasts of the same energy and spirit as seen in the title tracks of the first two movies, but it stands out with its individuality. It is catchy, peppy and contains a lot of spunk, which will make it a hit at the DJ consoles. An interesting start.

It also has a re-mixed version.

Next in line is a motivational number "Apna har din" with Shaan and Anushka behind the mike. The fast-paced song stresses on the fact that one should live life to the fullest. The lyrics are nice, but the composition is not so inspiring. It lacks punch.

This one too has a re-mixed version, which is also average.

"Ale" starts as an English song, but soon Hindi lyrics take over. It is quite average and doesn't make the listener sit up and take notice. Sung by Neeraj Sridhar and Antara Mitra, it fails to pep up the album.

It is followed by another fast-paced number titled "Desi kali". This has a heard-before feeling and doesn't strike a chord. The love song is upbeat and high on beats, but it falls flat in terms of appeal. Even the talented singers Neeraj and Sunidhi fail to save the song.

The song has a re-mixed version too.

Then the retro feel hits the album with two back-to-back songs from the Mithun Chakraborty-starring 1982 film "Disco Dancer".

The first is "Disco Dancer" crooned by Bappi Lahiri, who had sung the original song. Bringing alive the disco era, it catches the attention even after so many years. The classic that has been revisited exudes its original charm and is equally likeable even now.

Then there is "Yaad aa raha hai". Sung by Sudesh Bhosle, this one too brings alive the retro aspect and is sure to make a mark like it did when it got released for the first time.

On the whole, "Golmaal 3" has few hits and few misses. But the album is worth a listen.
Posted by Indiblogs at 3:52 PM