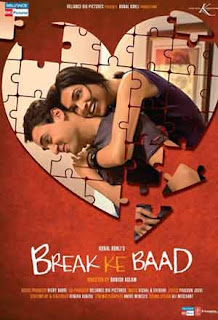 Vishal and Shekhar know the pulse of youth and so their music is usually young, hip and zippy. Repeating the trend, the composer duo has rendered some interesting and upbeat songs that are bound to be liked by music lovers, especially the young generation.

The album boasts of eight tracks, including one remix and one acoustic version.

It sets the mood with its first track "Adhoore", which is already making waves among listeners. Crooned by Vishal and Alyssa Mendonsa, the peppy, foot-tapping love song that describes the two main characters in the film is quite interesting and entertaining. A good start to the soundtrack.

The song also has a remix version, which is faster in pace.

The next is "Ajab leher" that has Neeraj Shridhar, Shekhar Ravjiani and Vishal behind the mike. The upbeat song that talks about one's neighbour makes good use of the saxophone, which is quite appealing. It's catchy and has the potential to become a favourite.

Next is a soft song, "Dhoop ke makaan", sung by Shekhar Ravjiani, Sunidhi Chauhan, Caralisa and Mikey Mcclearyu. The track is quite melodious even though the music is subdued and the focus is on vocals and lyrics. A decent number.

The song also has an acoustic version, which is more appealing. It has a raw feel that gives it an edge over the original.

Then there is "Dooriyan hain zaroori", a song that talks about the concept of space in a relationship. With rock influences, the song attracts attention. It is catchy and has spunk, which helps it stand tall among the other tracks.

The soundtrack also offers an English song, which is situational. "Don't worry about me" is likeable but, because of the language, might not enjoy mass appeal. Nevertheless, a good hear.

Finally, there is "Main jiyoonga" that starts with a bang. With piano as its predominant instrument, it generates quite a lot of interest. A good way to end the album.

On the whole, "Break Ke Baad" offers a robust mix of songs that are hummable and will be enjoyed by a majority of people.
Posted by Indiblogs at 1:12 PM