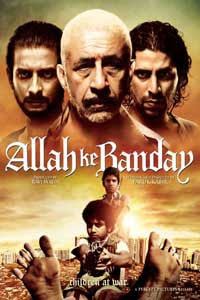 
Multiple composers and lyricists have come together to make the soundtrack of Sharman Joshi- starrer "Allah Ke Banday" and they defy the old saying that too many cooks spoil the broth. Each song of the film has its distinctive character and is entertaining in its own right.

"Maula" crooned by Hamza Faruqui and Krishna opens the album with a bang. The Sufi rock number is already making its presence felt on radio stations and television channels. The strong vocals and a high-pitch approach are the high points of the song that also boasts of good composition.

Next is "Kya hawa kya baadal" by the members of "Kailasa" band. Kailash Kher, Paresh and Naresh have come up with an enchanting composition with a dominant Indian sound. The song has a very edgy and haunting feel to it with Kailash's voice varying from base to high pitch during the course of the song. It has the ability to hook a listener for long.

Then enters "Rabba rabba", which has Ravi Khote behind the mike. It is an average song with nothing very interesting to offer. The composition is soaked in western flavour and also seems to have very strong rock influence.

Up next is "Mayoos", the only female song of the soundtrack, which is beautifully crooned by Sunidhi Chauhan. With minimal music arrangement, Sunidhi's voice takes centrestage and sets the mood. The slow-paced song is poignant and strikes a chord with the listener.

Finally, the album takes a turn with Ishq Bector of "Hip hopper" fame singing "Kaala jaadu", a fun and entertaining track. With foot-tapping beats and quirky lyrics, it has a mass appeal and is bound to find a place for itself.

On the whole, the album generates ample interest and will be liked by music lovers.
Posted by Indiblogs at 10:19 AM