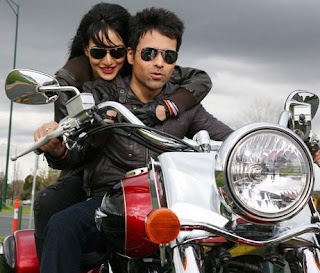 Music composer Pritam Chakroborty, who is a favourite of the Bhatt camp, brings forth another likeable soundtrack in forthcoming film "Crook". Even though the compositions fall under his signature style and not much experimentation is involved, the tracks do have the potential of getting noticed.

The soundtrack begins on an upbeat note with "Challa", a song soaked in Punjabi flavour. It's an energetic, foot-tapping number that holds the interest of the listener. Sung by Babbu Mann and Suzanne D Mello, it surely is a good start to the album.

The song also has a remixed version.

The mood of the album then shifts to a soft, romantic track "Mere bina", sung by Nikhil DSouza. The song has influences of rock that gives it an edge and makes it interesting.

It also has an unplugged version with KK behind the mike. This one is a shade better than the original track and immediately strikes a chord with the listener.

Next in line is "Kya", which is a typical Neeraj Sridhar song. An amalgamation of Hindi and English lyrics with strong orchestration and a western approach, the song is quite apt for the singer's voice. It is neither bad nor brilliant.

Then KK returns with "Tujhi mein", yet anothert romantic track. Even though the song is hummable and soft, it has a heard-before feeling.

The song's reprise version, sung by the same singer, is better and more appealing than the original.

Finally there is a beautiful song in "Tujhko jo paaya". The track has the acoustic guitar in prominence that gives it a pure and raw feel. Mohit Chauhan's brilliant vocals give the song an edge. The song is like a country version "Mere bina".

On the whole, the soundtrack of "Crook" follows Pritam's formula that usually results in hits.
Posted by Indiblogs at 1:57 PM